Should You Make a VR Music Video?

As the popularity of Virtual Reality (VR) technology reaches new speeds and attracts global attention, many musicians and artists find themselves asking the question: should I be making a VR / 360˚ music video? Well, you’ve come to the right place.

Is your music based on a strong concept?

With its unlimited creative capability, VR / 360˚ is the ultimate format for communicating the concept behind your song. Don’t just show people your story, immerse them in it and make them a character. Fill their vision with your world as they experience your music in a totally new way. VR and 360˚ media is especially suitable for aesthetic and conceptual musicians as it presents the perfect opportunity to design detailed and fantastical environments based around your music and ideas. Check out Gorillaz’s 360˚ music video Saturnz’ Bars (Spirit House) - below - which gave viewers the chance to live in Jamie Hewlett’s animated world and go on an adventure with the virtual band. Nothing communicated their virtual universe better than literally putting people in it.

Are you looking for an impactful video to accompany your track?

Multi-sensory experiences naturally create a stronger emotional connection with viewers than traditionally formatted media. This is because pathways to the brain are reinforced and repeated via multiple channels (senses), strengthening the memory. For powerful music that’s focused on a message, giving your viewer the chance to experience it first hand, via multiple co-ordinating senses, is much more likely to trigger a truer, longer lasting, emotional response. Your message will carry more weight and impact, strengthening that bond between you and your listener. Listen to the BBC’s podcast on how filmmakers are using VR to cultivate empathy within viewers and create change by telling stories through a character's point of view (ie. “living a day in their shoes”).

Do you want your audience to interact with your music video?

Where normal music videos are perfectly calculated, edited and angled displays of exactly what the director wants us to see, 360˚ and VR experiences give viewers control over their view. Do you want your music video to be interactive, or passive? In VR and 360˚ media, viewers become the directors of their own experience, and instead of sitting back and gazing at the screen (where you're now competing with everything else not on the screen in their current environment), your viewers are requried to look around just as they do in real life. With a whole environment to explore, viewers are no longer being spoon-fed content. Instead they are given the opportunity to experience your music in a highly personal way, discovering features for themselves. No two screenings of the video are ever the same and each person can watch your music video multiple times to get a new experience. Breathe life into your music videos and get people comparing their own experiences with their friends. Say good bye to the "I've watched it once, I don't need to watch it again".

Do you want to earn money from your music video? 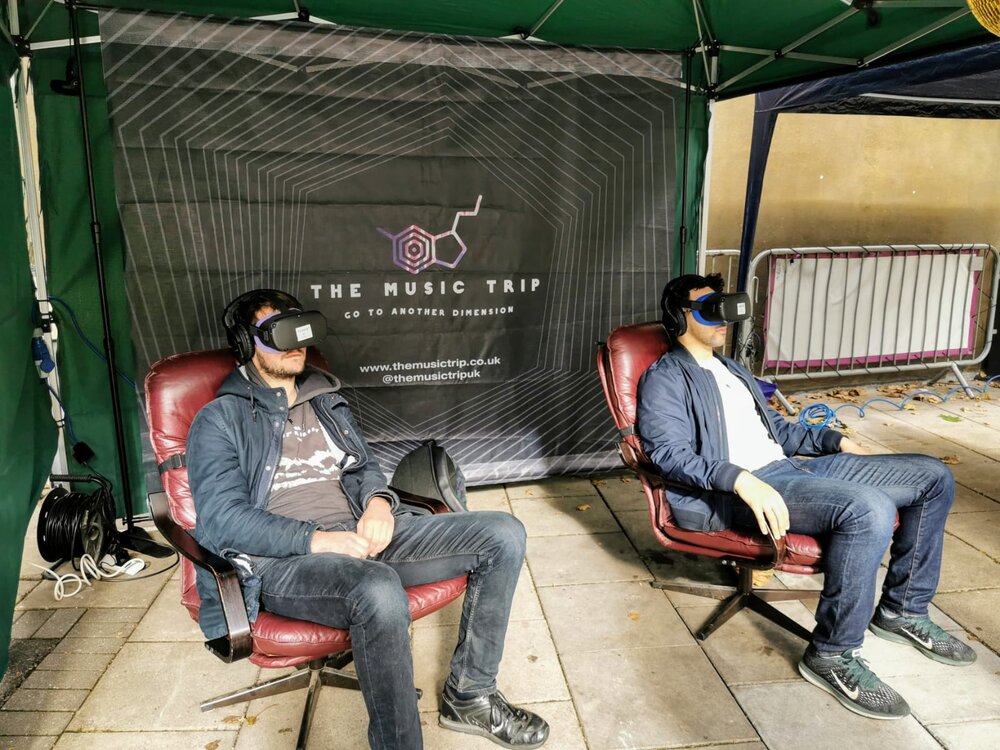 VR Music Arcades, like The Music Trip's, allow artists who create VR music videos to tour their experience within the arcade. We take VR headsets, haptic systems and ambisonic audio technology to events around the UK, giving the wider public a chance to experience your content with the best possible technology - just as it should be. Our unique PRS, PPL and VPL licences then mean that artists and labels earn money every play. Artists are then able to access a global audience through promoting it online, as well as physically. It’s the best of both worlds.

Do you want your audience to experience your music in a new way?

We all want to make a splash. We’ve also all seen similar aesthetics and film-making techniques across multiple music videos. But with the ever evolving technology utilised by Extended Reality XR filmmaking (Touchdesign, Unreal Engine, 360˚ filming, VFX, animation and so much more) there are always new ideas and applications to play with and incorporate into the media. The visions and concepts of musicians’ songs are always different, and personal artistic influences mean that there will never be two 360˚ or VR music videos the same as each other. You can play with the audience's perspective, their involvement in the video, and the way the actors interact with them. It's much easier to draw emotional responses when the viewer is fully immersed in the experience.

Are you a forward thinking artist?

Virtual Reality headsets and other immersive technologies are advancing everyday with new uses of the media making headlines and naturally reaching larger crowds. Experiences made in 360˚ will only increase in relevance, and with more people getting VR headsets thanks to better consumer availability, good content reaches people fast. With the VR music video we created for Because of Art, the reach of the experience was far greater than the same audio file on YouTube. VR and 360˚ media, especially in the context of the music industry, is gaining traction fast.

If you nodded your head throughout this article, then it sounds like a VR music video is perfect for you. So what are you waiting for? Apply your music and creativity to VR and give your fans a real experience of you as an artist. Open the door into your world. Give your fans exclusive access to the weird and wonderful inner workings of your mind and communicate the message of a song through total immersion in it.

Dont know where to start? Drop us an email at hello@themusictrip.co.uk and we'll help you understand the exciting process of creating your own VR music video.