What is a Virtual Reality Music Video?

Virtual Reality music videos are immersive audio-visual experiences where viewers are surrounded by 360˚ content. Viewers turn their head to expose the content in the direction they are looking, just as in reality. It often features spatial audio that links to the video so that sounds come from their visual sources in the content. Created by artists for their fans, they accompany specific tracks and help bring a new understanding to the music. VR music videos are best enjoyed with a VR headset, however they are also viewable on desktops, laptops, tablets and phones through YouTube and Facebook.

Virtual Reality works by mimicking the natural way that we, as humans, see the world around us. We turn our head and move our eyes to see new things - and this is our point of view (POV). Similarly, when we hear sounds in reality, they come from their sources - for example, if someone speaks to you from the left, even if you were to shut your eyes, you could locate their voice to your left. 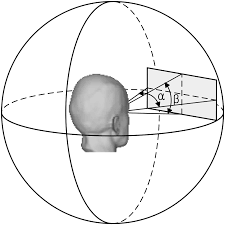 Virtual Reality works like this. It uses 360˚ footage to create a sphere of content that wraps around the viewer - so that anywhere they look (360˚ means it is everywhere) they will see part of the footage - corresponding to the direction they are looking. This is best enjoyed with a VR headset as it blocks out the viewers real environment and replaces it with the goggle-screens that sit in front of their eyes. The technology and cameras inside and out of the headset mean it can tell which direction you're are looking in. This means the viewer can use their natural actions of looking up / down / left / right to see the media, as opposed to scrolling with their finger if they watching it on their phone/desktop. Because they are not distracted by - or even able to see - their real environment, the viewer's brain is partially tricked into thinking the media is their reality, no matter how obviously it might not be.

To further this immersion, spatial audio technology like ambisonic and binaural sound allow the creators to 'place' sounds within the 360˚ field. This means that if in the video, you see a spaceship coming from above, the noise of the spaceship will also be heard from above.

It is these simple yet co-ordinating cues that add up to create a truly immersive experience, which lends itself perfectly to music.

VR Music Videos are the ultimate format to express the concept, message and story behind a powerful track, as they demand the viewer to be involved. With a first person perspective, they become characters in the story and are asked to look around them to notice things - just like in reality. This means artists can communicate the themes of their music in a far more powerful way; they can create visual worlds and stories around the music and let their listeners live them.

Most music videos are passive TV-like experiences, where viewers sit back and watch the content on a small screen. And this is no bad thing; passive experiences are familiar, easy and convenient, and apply themselves perfectly to music for many reasons - and we don't need to change this. In fact, it is our opinion that VR Music Videos should only be for those really special tracks that require such immersive visual content. VR is expensive and it must be considered and thought-through as it's a totally different style of storytelling. Not to mention, VR headsets are notoriously inconvenient for viewers when they just want to watch a music video (which is why you'll find our VR content on YouTube as well - you can watch it on phones, laptops and all smart devices, it just won't be quite as good).

A problem many non-gamers have with VR is the physical obstacle of putting on the headset. Many, understandably, agree that it's isolating and inconvenient compared to watching a normal video, however it's only this initial step of putting on the headset that's the hurdle. As soon as your vision goes black and you enter the new reality, there is no doubt of it's impressive capability and capacity for entertainment. The transportational, immersive effect of Virtual Reality means that for duration of the experience you really do believe you are somewhere else - and it is so much fun.

Fortunately, there are solutions for the above mentioned problems: VR Arcades. Specifically, VR Music Arcades. Companies like The Music Trip take a pop-up VR Arcade to parties, festivals and events with the latest immersive technology, meaning anyone who doesn't own a headset can still experience the VR music video in it's purest format. We understand there are many reasons people don't want to buy VR headsets, and that is why the arcades exist - to allow people to dip their toe in the immersive pool of VR, watch their favourite artist's VR experience, and then go back to the party! It's affordable and fun for the viewers, while it's sustainable to the artists: they get paid per play and free physical promotion of their music video.

VR Music Videos are powerful, expressive and intricate pieces of media that take time and energy to produce - but they are immensely worth it when your fan is able to step inside your world and experience your music in a whole new medium.

At The Music Trip, we work with artists around the world to design concepts that are a reflection of the inner workings of their mind, illustrating their tracks with worlds designed around their music. Whatever a musician's dreamworld may be, we strive to recreate it - via live action, animation, VFX and whatever other tools we may need - and then we place the listener right at the centre of it. VR music videos, like traditional music videos, can be found on YouTube (check out our channel where we have original productions by us, as well as a playlist of some of our favourites) or at events we visit with The Music Trip VR Arcade.

If you’re an event planner and want The Music Trip to appear at your festival, party or event, then get in touch here. We’re tailorable to all event sizes and spaces.

If you’re an artist and are interested in creating an VR music video with The Music Trip, then get in touch here - we love getting to know artists and exploring ideas with their music.